Version 0.8 of The State Decoded is now available on GitHub. This is our biggest release to date, in part because it’s a combination of what was meant to be both the v0.8 and the v0.9 releases. That means that it took twice as long to produce this release as was planned, but it was worth it. It’s comprised of 709 Git commits, more changes that were committed for all prior eight versions combined. This is the final major release prior to v1.0. The two biggest improvements are a total overhaul of the user interface with a responsive design and the integration of the Apache Solr search engine. Here is a rundown of the major changes: 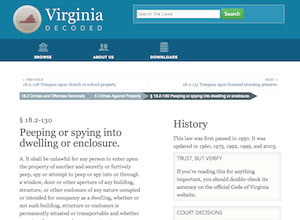 John Athayde and Lynn Wallenstein of Meticulous were responsible for dropping the old design and creating a new one from scratch. They’ve rendered the site almost unrecognizably different, which a highly modular, flexible design that looks good on screens of all sizes, is easy to customize, and will continue to grow with the State Decoded project. The layout is coded in SASS, which is handy for a lot of designers, and employs a pluggable template system that makes it easy to drop in custom designs. It even has a nice print stylesheet for folks who still like to have a hard copy in their hand. There’s no overstating what a huge improvement that this is.

It’s really insulting to call this a mere search engine. The team at Open Source Connections—John Berryman and Doug Turnbull, in specific—designed an implementation of Apache’s Solr search platform that’s optimized for legal data. Of course, we used this to add a site search engine with spellcheck and live search suggestions, but having legal data indexed by Solr (and the underlying Lucene system) facilitates all sorts of exciting new features in the realms of natural language processing, information retrieval, content recommendations, and machine learning.

The complexity of The State Decoded and the needs of its users outgrew the code base and data structure that had functioned from v0.1 through v0.7. Long-time State Decoded contributor Bill Hunt took on this project, completing it in just a few weeks, implementing a routing table, moving a lot of functionality into controllers, and routing all queries to a permalinks table. The old approach looks pretty clunky compared to what Bill built.

We’ve tested out The State Decoded on the major Linux distributions and hosting platforms, identified all of the changes that were needed to allow it to work smoothly in those environments, and modified the software accordingly. There’s now an automated environmental test suite, to make sure that The State Decoded will work properly, with multiple paths of accomplishing the same task, to require as little work as possible to configure the server. The installation process has fewer steps than ever, as everything that can possibly be automated is automated.

There’s an entire workflow to handle new editions of codes, bulk downloads are created automatically, a sample XSLT is included for State Decoded XML, there’s a default home page that doesn’t require any customization, it now supports non-unique section identifiers (!), there’s an API method for search, there’s a proper administrative section now, we have an assets repository for the design’s Photoshop files, a sitemap.xml is automatically generated, every law now has Dublin Core embedded, and dozen of other things.

The work done by Bill Hunt, Meticulous, and Open Source Connections wouldn’t be possible without the generous support of The John S. and James L. Knight Foundation, whose funding made it possible to hire them. And Bill’s ongoing work on The State Decoded is courtesy of his employer, The OpenGov Foundation, who now employs him to contribute to the project and to implement The State Decoded in cities and states around the U.S.

Thanks, too, to Chris Birk, Karl Nicholas, Nick Skelsey, Josh Tauberer, and Rostislav Tsiomenko for their suggestions, testing, and contributed code.

One thought on “Version 0.8 Released”